Las Vegas Strip hospitality workers filed a lawsuit against casino operators on Monday accusing the companies of failing to protect employees from Covid-19, one of the first efforts to hold employers legally responsible for infections as cases in the U.S. surge.

The lawsuit, filed in U.S. District Court in Las Vegas against the owners of Harrah’s, MGM Grand and Bellagio casinos, says the companies didn’t immediately shut down food-and-beverage outlets and other areas after learning of positive cases, didn’t immediately inform employees when co-workers tested positive, and didn’t adequately contact-trace before allowing colleagues of infected employees to return to the job.

Culinary Union Local 226 and Bartenders Union Local 165, through their joint bargaining agency, filed the lawsuit against Harrah’s Las Vegas LLC, a subsidiary of Caesars Entertainment Corp., and The Signature Condominiums LLC at the MGM Grand and Bellagio LLC, subsidiaries of MGM Resorts International.

In response to the lawsuit, MGM Resorts said the company has offered free testing to workers before returning to the job and requires testing for anyone with symptoms or who might have been exposed. Managers have been trained in response protocols and work closely with public-health officials’ on contract tracing following positive test results, according to the company.

Senate Republicans and the Trump administration have pushed to shield companies from liability during the coronavirus pandemic as a condition of the next round of relief for households and businesses. U.S. companies have expressed concern about litigation as workers get sick or die from Covid-19, the illness caused by the new coronavirus. The U.S. Chamber of Commerce has said the risk of class-action claims and other lawsuits could deter businesses from reopening.

Sixto Zermeno, a bellman at the Signature at MGM Grand for 10 years who is part of the lawsuit, said that when he was called back to work, the hotel was short-staffed, and guests weren’t social-distancing or wearing masks. On June 10, he was tested for Covid-19 after getting a fever and headache, and the next day learned that he was positive.

He said management was difficult to reach to report his case, and after alerting the MGM Resorts corporate office, the company didn’t immediately close down the bell desk and valet booth where he worked. Bellmen and valets who worked shifts with him continued to interact with guests, according to the lawsuit.

CLICK HERE TO GET FOX BUSINESS ON THE GO

At least three valets and bellmen at The Signature have tested positive, according to the lawsuit.

It also says that Harrah’s failed to properly respond when a food runner at Guy Fieri Vegas Kitchen and Bar, co-managed by Harrah’s, tested positive.

Nineteen union workers or their dependents have died from Covid-19, according to the union.

ANAHEIM, Calif. (Reuters) – Workers at California’s Disneyland Resort protested from their cars on Saturday, arguing that the Walt Disney Co has not agreed to adequate protections for employees when the destination reopens to the public amid a pandemic.

The company had planned to welcome guests back to Disneyland and neighboring California Adventure starting July 17 but delayed the restart date indefinitely.

Disney said this week that it would set a new opening date after the state issues guidelines on how theme parks can return to business safely amid the global coronavirus outbreak.

On Saturday, about 200 cars formed a caravan outside the resort in the protest staged by the Coalition of Resort Labor Unions, a group of 11 unions that represent 17,000 Disneyland workers. 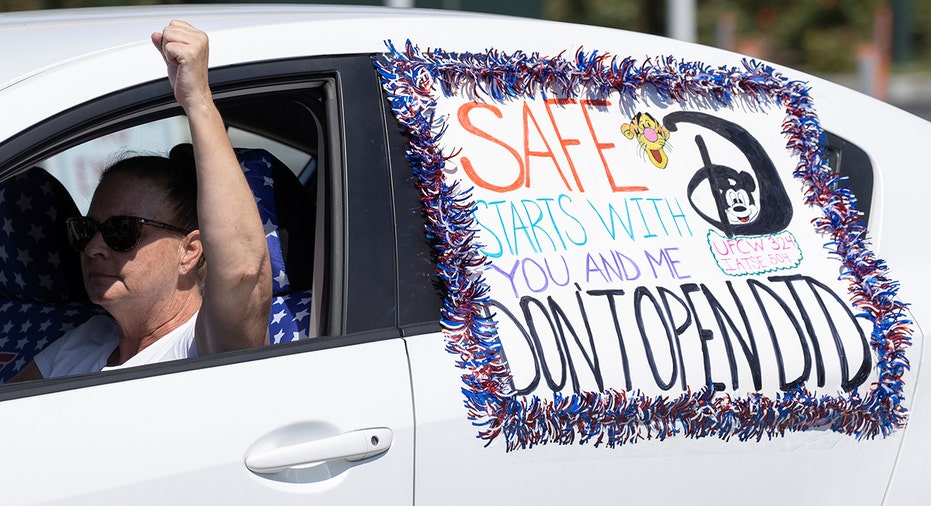 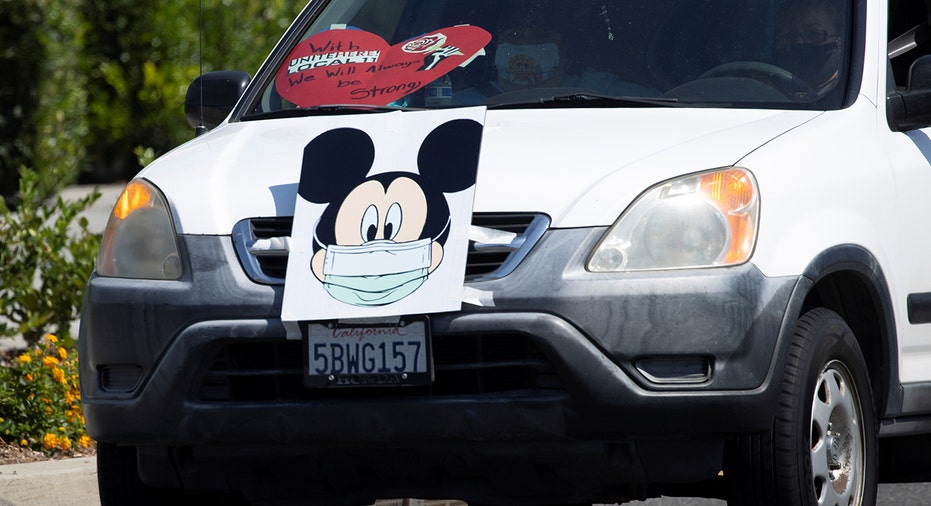 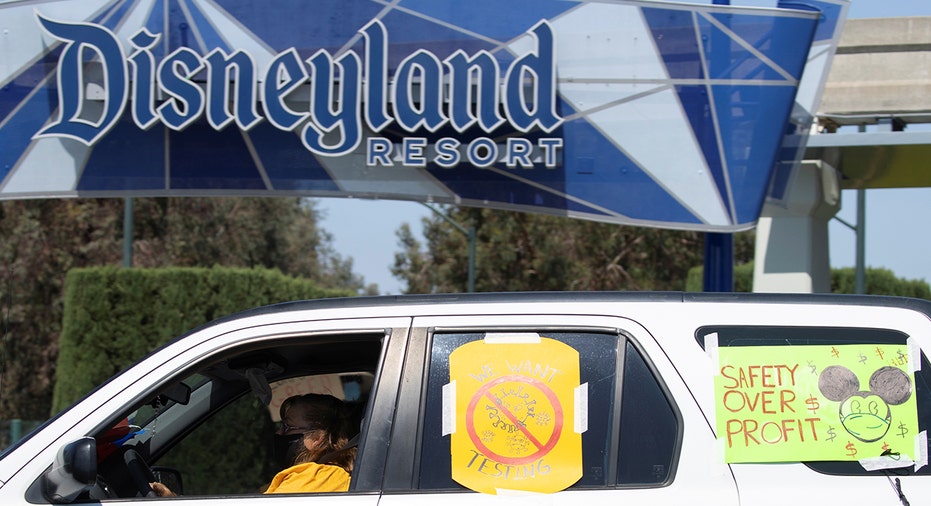 The unions have called on the company to commit to providing onsite testing for COVID-19, the disease caused by the novel coronavirus.

"When Disney does reopen, we want it to be as safe as possible for cast members, for the guests, and for the families that cast members have to go back to," said Maria Hernandez, a union member who attended the rally.

Disney said in a Saturday statement that it has reached agreements on coronavirus protections with 20 union affiliates that include additional sick pay, face coverings for guests and cast members, and reduced park capacity.

In a letter to unions earlier this week, a Disney representative said existing COVID-19 testing was not recommended by U.S. health authorities for routine screening.

Disney began shutting its theme parks in January as the coronavirus spread. It has reopened parks in Shanghai and Hong Kong to a limited number of guests. The company plans to open Walt Disney World in Florida on July 11.

Could a Black Lives Matter logo at work could get you in trouble? What about taking time off to protest? Experts say now is the time for workers and their employers to brush up on company rules governing conduct on and off the job.

VARNEY: TRUMP STANDING FOR LAW AND ORDER AMID VIOLENT PROTESTS

Protests against racism and police brutality have spread around the world, ignited by the May 25 killing of George Floyd while in Minneapolis police custody and sustained by outrage over the deaths of other black citizens, including Breonna Taylor, Ahmaud Arbery and Elijah McClain.

In the days after Mr. Floyd’s killing many companies rushed to condemn racial injustice and express support for the protests.

“I can’t recall another time that this many major companies and brands have been willing to take a stand,” said Aaron Holt, a Houston labor attorney at the international law firm Cozen O’Connor.

Now, as some workers join the protesters, employers need to review their company practices to make sure policies on conduct are neutrally and consistently applied, Mr. Holt said. Companies generally wouldn’t have explicit rules on protesting, but an employee participating in activism could run afoul of policies on attendance, attire or off-duty conduct.

“You can’t pick and choose when you want to enforce a policy,” Mr. Holt said. “If you allow employees to wear masks that have logos on them like their favorite sports team but you don’t allow Black Lives Matter masks, then you’re not consistently applying the policy. Or you can say no logos.”

COUNTRY MUSIC RECKONS WITH RACIAL STEREOTYPES AND ITS FUTURE

The same applies for schedule flexibility and requests for personal time off, he added.

Now that more companies, large and small, are voicing support for the Black Lives Matter movement, employers also have to make sure their words are consistent with their employee policies, said Stacy Hawkins, a professor at Rutgers Law School.

Starbucks Corp. said earlier this month that it would give out 250,000 T-shirts bearing social-justice slogans including “Black Lives Matter” to its employees, reversing its earlier decision to bar them from displaying support for the movement while at work. The coffee giant has planned other initiatives, including a $1 million commitment from the Starbucks Foundation in neighborhood grants to promote racial equity. 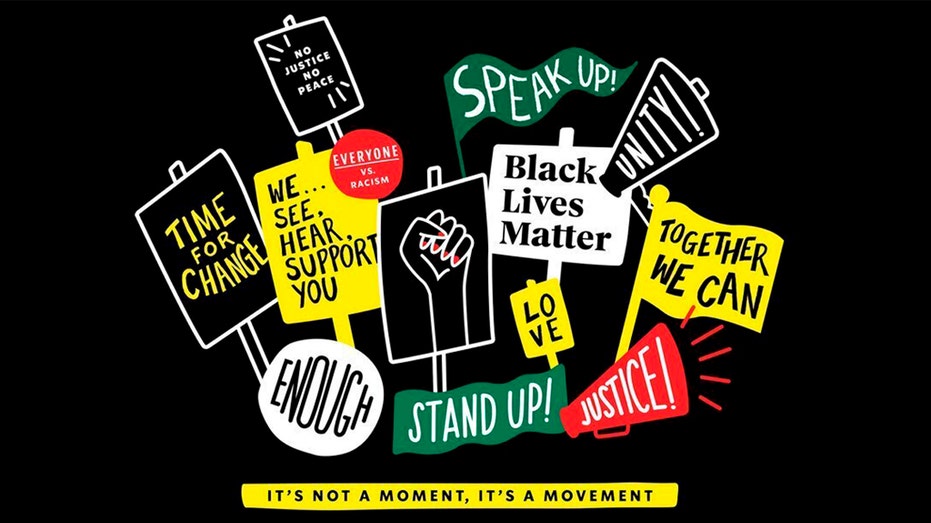 In this undated image provided by Starbucks via Twitter is a graphic with Black Lives Matter signs for the company’s new t-shirts. (Starbucks via AP)

“It’s very possible that a manager would tell one employee that they can’t go to a Black Lives Matter protest and several months before allowed another employee to attend the Women’s March, and not realize that they are treating these people very differently,” said Prof. Hawkins, who added the disparity may require bosses to confront their unconscious biases.

Safiya Bansfield, a 22-year-old administrative assistant in Seattle, has attended a couple of Black Lives Matter demonstrations, but she has avoided talking about her activism at work. As the only black person in her predominantly white office, Ms. Bansfield said she worried about offending a co-worker or jeopardizing her professional goals.

“I’m still learning the dynamics of the office,” she said.

Workers may run some employment risk if they participate in protests or other forms of activism. Most U.S. workers are at-will employees, meaning they can be fired without notice and for any reason. There are exceptions, such as those provided under the National Labor Relations Act, which protects employees who are protesting working conditions. Some states also have laws that prevent employers from firing someone for taking part in lawful off-duty activities.

Perhaps most misunderstood is what the First Amendment does and doesn’t provide, said Prof. Hawkins. While the First Amendment protects a person’s rights to free speech and assembly without government interference, it doesn’t prevent a private employer from firing or disciplining a worker for actions such as engaging in political speech at work.

“The idea that we lose those rights in any context is shocking to most people,” she said. 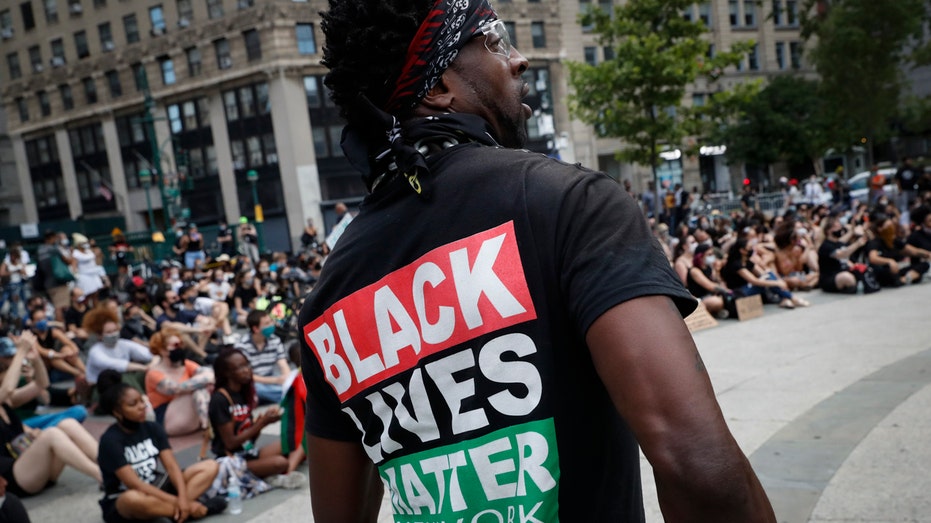 While peaceful protesting during one’s personal time should be a nonissue for most employers, Mr. Holt said a worker’s off-duty conduct could threaten their job if they break the law or engage in behavior that goes against their organization’s values, such as using defamatory or discriminatory language.

Amy Cooper, a white woman in New York City, lost her job as an investment manager after a viral video showed that she called 911 to report that a black man was threatening her life; in reality, the man, a bird-watcher, had asked her to leash her dog.

Thousands of people have been arrested during the current wave of protests across the U.S., according to an Associated Press tally. Many employers conduct periodic background checks on workers, but in most cases employers wouldn’t take actions against an employee based on an arrest alone, said Amber Clayton, director of the Society for Human Resource Management HR Knowledge Center.

The rise of cellphone video has made it easier for an employee to prove compliance with the police, according to Mr. Holt, the attorney in Houston. “That’s something that someone can show an employer and say, ‘This is what I was doing, take my word for it,’ ” he said.

Some employers, such as school districts, may require employees to disclose arrests, but Prof. Hawkins said workers shouldn’t voluntarily divulge that information if they don’t have to.

If an employee is arrested and may miss work because he or she can’t afford bail, the best practice is to communicate with the boss, Ms. Clayton said, adding “try to reach them, so you’re not considered a no-call, no-show.”

Employees can also protect their jobs by making sure to follow their company’s policies around attendance and dress, such as not wearing company-branded apparel during demonstrations or not calling in sick to attend a protest but rather taking personal or vacation time to do so.

In early June, Diamond Armstrong was worried she wouldn’t get the chance to protest because of her work schedule. She is a shift supervisor at &pizza, a restaurant chain based in Washington, D.C. By the time her shift ended, citywide curfews were taking effect. “As a black woman, I deal with these issues,” she said. “I needed to be a part of this.”

Ms. Armstrong, 29, planned to ask for a day off, but before she could make the request, her boss approached her and offered her time off to protest. The next day, the pizza chain announced a new policy allowing all of its workers to take three days of additional paid time off to participate in protests and other forms of activism.

For employers, trying to prevent employees from any kind of participation on- or off-duty may not be the best approach. “There is a middle ground,” Mr. Holt said. “You can have a professional and effective workplace and allow employees to make their voices heard.”