Home » Markets » AMP board was given seven days to purge Murray and Fraser. It only needed three

Either Murray, along with fellow AMP board member and closest ally John Fraser, resign or Allan Gray would requisition an extraordinary general meeting of shareholders to have the two removed.

The board had seven days to make a decision. 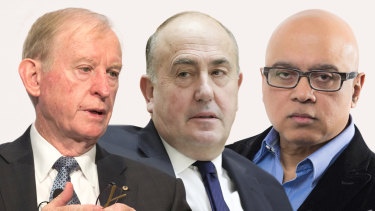 The retention of senior executive Boe Parahi after alleged sexual harassment claims in 2017 and his elevation to chief executive of AMP Capital in 2020 had infuriated shareholders who wanted heads to roll.

Pahari had paid a financial penalty which consisted of losing 25 per cent of his bonus, a settlement to his alleged victim Julia Szlakowski and the payment of her and AMP’s legal fees. The payments totalled more than $1.5 million, people familiar with the deal told The Sydney Morning Herald and The Age.

By the time a few directors drove to AMP’s head office in Sydney on a chilly Sunday morning and the remainder joined via a Zoom meeting, the resignation of Fraser and Murray was a formality.

Since Allan Gray had thrown down the gauntlet on Thursday the eight directors had gone into hyperdrive – exchanging calls and assessing options. The workshopping had been completed.

By Sunday all directors were aware there was no room for negotiation. They knew there was a groundswell among other shareholders that AMP needed to deal with the escalating crisis surrounding the promotion of Boe Pahari to lead the company’s largest and most important business, AMP Capital.

AMP believed that Allan Gray had corralled a number of Australian shareholders who together had enough firepower to control the board. Mawhinney denies it had sought the support of other large investors.

And Murray, who ironically had been recruited in 2018 to the AMP board and chair to act as a circuit-breaker to the board spill after damning revelations at the banking royal commission, knew that had he not acquiesced to the demands of shareholders De Ferrari’s position could be under threat.

Allan Gray declined to speak about the events leading up to yet another purging of the AMP board saying only that it was happy with the outcome.

However, it is notable that at last year’s annual meeting Allan Gray spearheaded an unsuccessful vote against the election of Murray – in protest against the board’s decision to sell AMP Life. But it did not vote against Fraser who was also up for re-election.

Fraser appears to have fallen foul of shareholders including Allan Gray because he was chairman of AMP Capital when Pahari was promoted.

More recently Fraser gave an interview in which he described how he sought to be accompanied by two older female secretaries at social events to guard against any potential allegations of misconduct. This is said to have not impressed some shareholders.

Whether all shareholders and staff will be satisfied with the departure of Murray and Fraser and the demotion of Pahari as a peace offering remains to be seen.

Pahari will lose the plum job heading AMP Capital but he will remain in a senior position and head back to London.

Curiously Allan Gray did not seek to have Pahari terminated. And AMP didn’t offer it.

The departure of Pahari as the head of AMP Capital would trigger agreements between investors in some of AMP Capital’s large infrastructure funds that would allow them to withdraw their money. Key person clauses are often built into funds management mandates, and it is understood that of the three ‘key’ people inside AMP, two have already left and Pahari is the only one remaining.

Further complicating AMP’s position, is if Pahari left AMP Capital it would require a large payout of an accumulated performance bonus – an amount referred to in the industry as a "carry". These are based on the uplift in the value of the fund.

AMP has an additional problem with Pahari in that it had already dealt with the alleged sexual harassment offences back in 2017.

To have sacked him for alleged sexual harassment now would be in effect re-litigating the case, according to one large shareholder who added it would be akin to the legal issue of double jeopardy.

Start the day with major stories, exclusive coverage and expert opinion from our leading business journalists delivered to your inbox. Sign up for the Herald‘s here and The Age‘s here.

A concise wrap of the day on the markets, breaking business news and expert opinion delivered to your inbox each afternoon. Sign up for the Herald‘s here and The Age‘s here.