Home » Business » How Tucker Carlson went from a CIA reject to the most-watched person on cable news, accused of peddling prejudice to millions

Drawing an average of 4.3 million viewers in the last quarter, Tucker Carlson is currently the most-watched man in the country.

The Fox News anchor, known for his anti-immigrant views, is becoming increasingly popular with right-wing conservatives.

But he is no stranger to controversy: Over the years, Carlson has made contentious comments about women, immigrants, and Black people that have landed him in hot water and prompted more than a dozen companies to pull their advertisements from his show.

Scroll down to find out how Carlson went from being rejected from the CIA and publicly taken down by Jon Stewart, to drawing massive audiences and being put forward as a likely contender for the 2024 presidency.

Tucker Carlson was born in May 1969 in San Francisco, California into a wealthy family. His father, Richard Warner Carlson, had forged an eventful career in journalism and later politics, and his mother, Lisa McNear, was an artist. 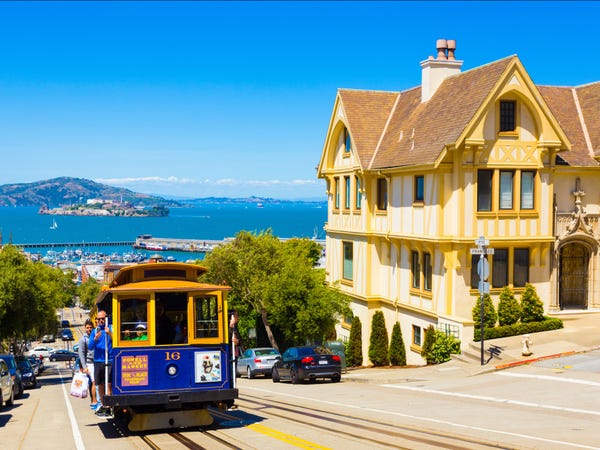 When he was six years old, Carlson's parents split up and his mother left the family to pursue a "bohemian" lifestyle in France, according to the Columbia Journalism Review. Until her death in 2011, Carlson and his little brother, Buckley, had little contact with her.

Speaking of his mother, Carlson once said: "Totally bizarre situation — which I never talk about, because it was actually not really part of my life at all," the New Yorker reported.

At the age of 14, Carlson was sent to a prestigious boarding school on Rhode Island, where he was known for his "beach boy looks" and his ability to dominate the room at the after-dinner debating society. 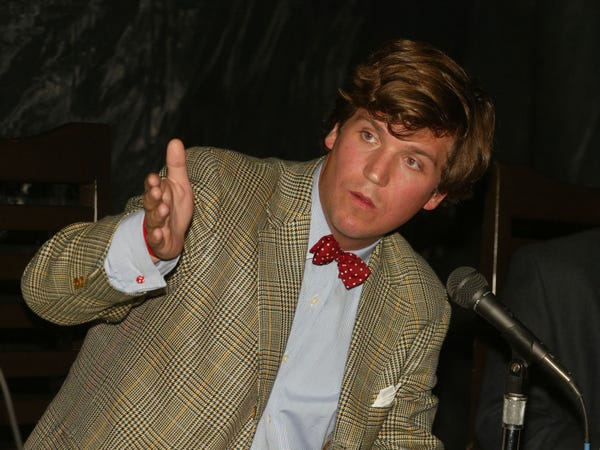 From the beginning, Carlson's classmates viewed him as "a self-assured conservative who wasn't afraid to speak his mind," the New Yorker reported.

During his time at boarding school, Carlson also met his future wife Susie Andrews, who was the daughter of the then-headmaster, Reverend George Andrews. 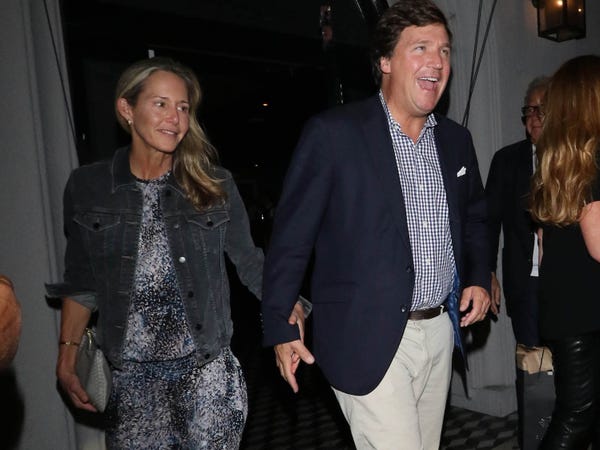 The couple got married in 1991 in the chapel at their old high school. They have four children, according to the New York Times.

Carlson and his family are members of The Episcopal Church. During the 2004 Republican National Convention, Carlson said he was "utterly opposed to abortion" and thinks its "horrible" and "cruel" — a stance he still holds today, the Washington Post reported.

It was in 10th grade of boarding school that Carlson also started sporting his signature look: the bow tie. 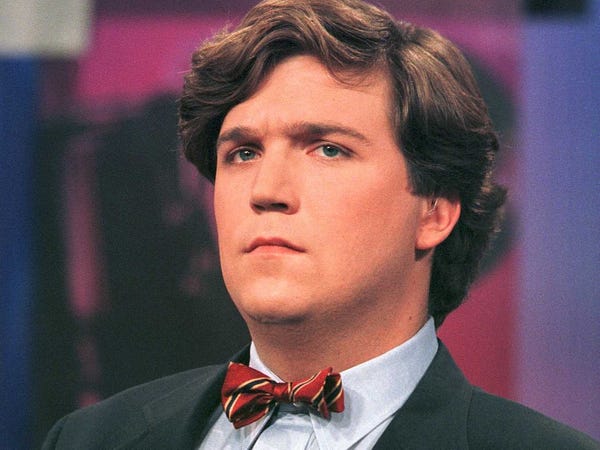 When he hosted the nightly program "Tucker" on MSNBC from 2005 to 2008, the television cable advertised his program with posters that read, "The Man. The Legend. The Bow Tie," the New Yorker reported.

Carlson officially got rid of the bow tie look in 2006, when during the final segment of his MSNBC show, he said: "I like bow ties, and I certainly spent a lot of time defending them. But, from now on, I'm going without."

After graduating from Trinity College in Hartford, Connecticut in 1991, Carlson applied to work for the Central Intelligence Agency (CIA), but was rejected. It was then that he decided to follow in his father's footsteps and pursue a career in journalism. 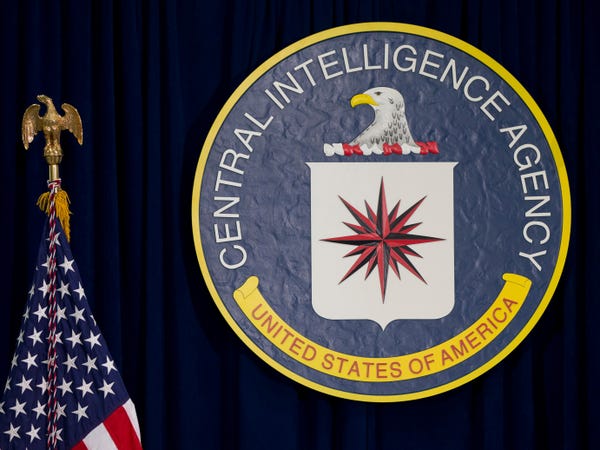 Tucker reportedly only got accepted into Trinity College with the help of his wife, after failing to impress any prestigious universities, according to NowThis News.

After several jobs for weekly newspapers and news magazines, Carlson decided to make the jump to television in 2000. He landed his first memorable roles on the CNN shows "The Spin Room" and "Crossfire." 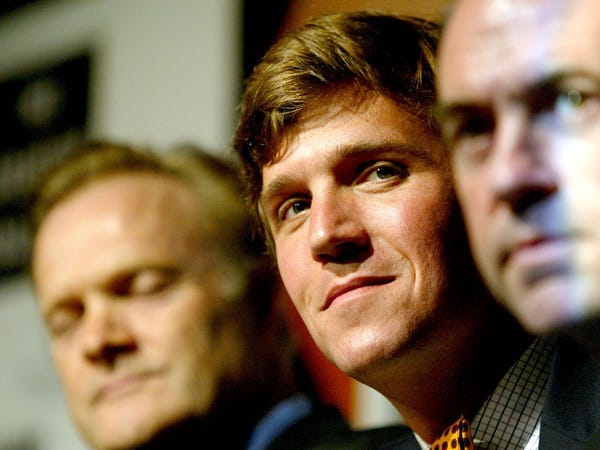 "I had financial demands," Carlson told the New Yorker in 2017 when he was asked why he made the switch to television. "When you're reproducing at that rate, it's kind of unsustainable."

Carlson's time on CNN's was marked mainly by one incident on "Crossfire" in 2004 when then-Daily Show host Jon Stewart called him a "d***" and said his program "was hurting America." 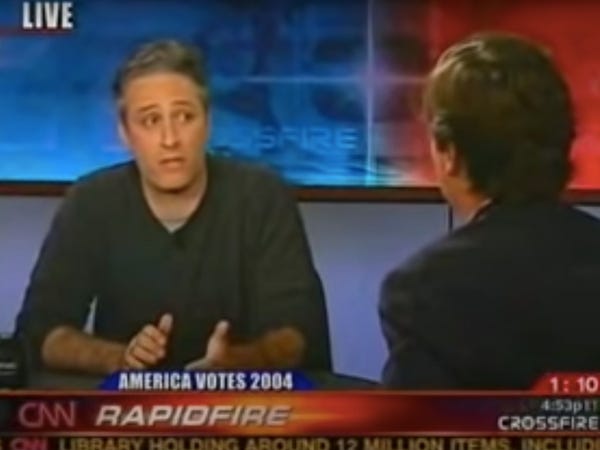 Stewart told Carlson that he thought the debate show — that had liberal and conservative pundits challenge each other on political issues — was biased and harmful.

"It's hurting America. Here is what I wanted to tell you guys: Stop. You have a responsibility to the public discourse, and you fail miserably," Stewart said, according to CNN.

The exchange went viral and shortly after, in January 2005, CNN canceled the show and announced they wouldn't renew Carlson's contract.

Carlson later said that he had resigned before the announcement.

"I resigned from "Crossfire" in April [2004], many months before Jon Stewart came on our show, because I didn't like the partisanship, and I thought in some ways it was kind of a pointless conversation…each side coming out, you know, 'Here's my argument,' and no one listening to anyone else. [CNN] was a frustrating place to work."

In 2006, Carlson participated in Season 3 of "Dancing with the Stars" but was eliminated in the first round. By this point, the TV host had left CNN and was working for MSNBC. 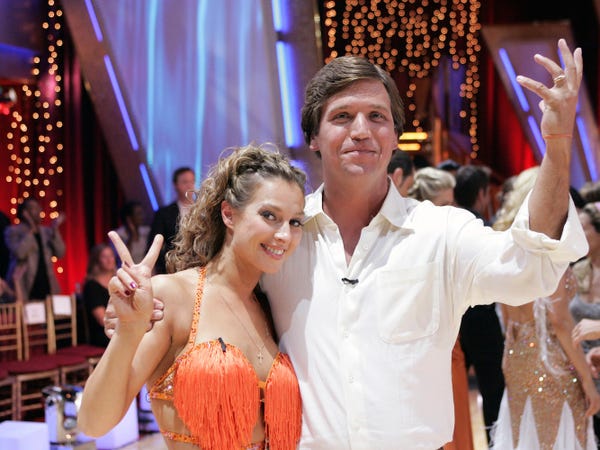 Carlson was once a "pretty heroic" drinker according to one of his friends, but quit in 2002. He also reportedly buys nicotine gum in bulk from New Zealand, telling the "Gavin McInnes Show" in 2017 that he spends around $300 a week on it. 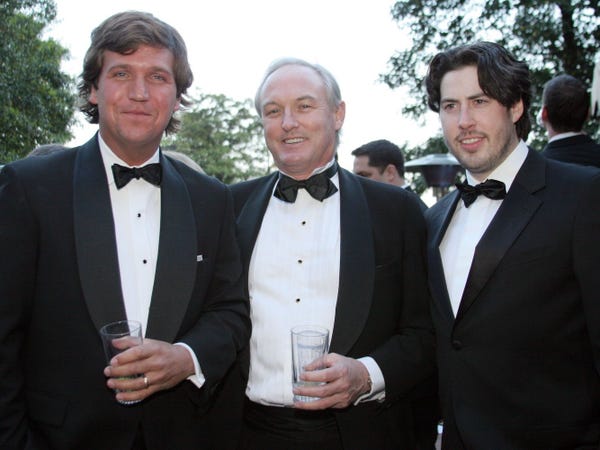 At the age of 40, Carlson found himself unemployed after MSNBC canceled his show due to low ratings. This prompted him to launch The Daily Caller — a right-wing news website that regularly features articles written by white supremacists. 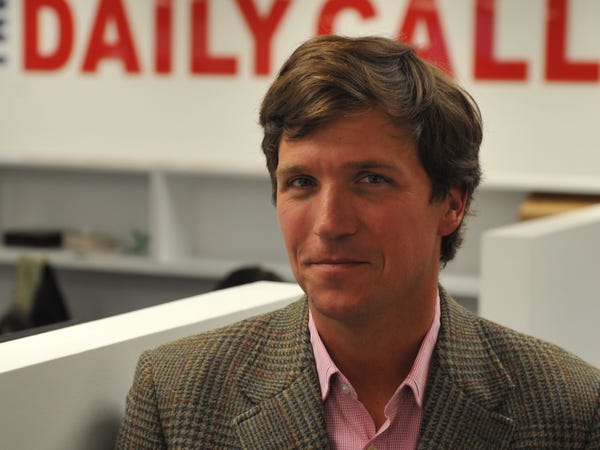 Carlson sold his ownership stake to co-founder Neil Patel in June 2020 and left the site, according to the Wall Street Journal.

In 2009, Carlson joined Fox News as a contributor, appearing on shows like "Fox and Friends" and jumping in as a substitute host of "Hannity." 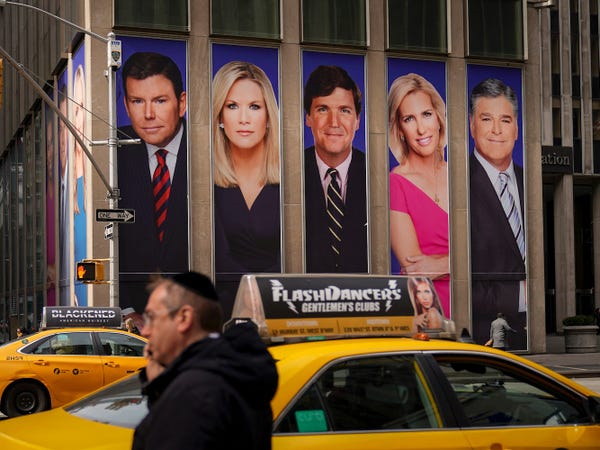 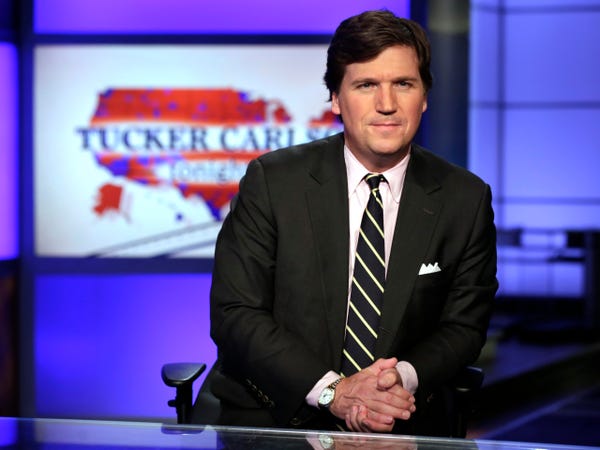 Over the years, Carlson has been making headlines with controversial on-air comments about immigrants, women, and Black people. After a mass shooting in El Paso, Texas, in 2019, where the shooter left behind a manifesto about a "Hispanic invasion of Texas." Carlson said white supremacy was "not a real problem." 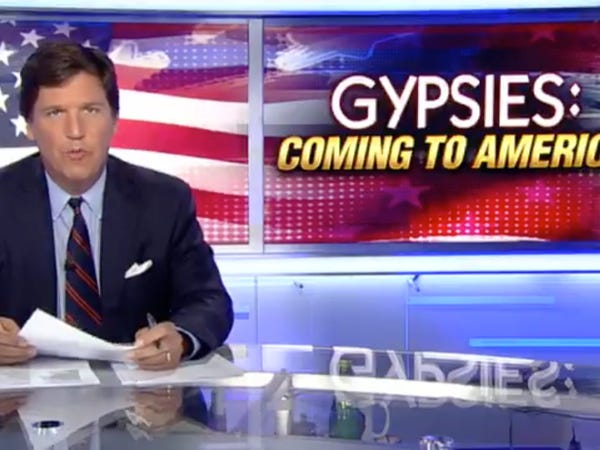 In December 2018, Carlson sparked anger when he said that immigrants would make the country "poorer and dirtier." He never apologized and instead, accused the backlash as being an attack on freedom of speech. 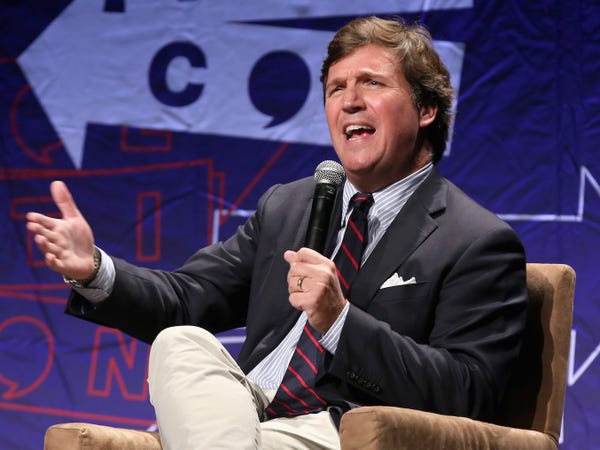 Carlson has also made numerous comments about women. In one debate about President Trump with Teen Vogue contributor Lauren Duca in 2016, Carlson told her to "stick to the thigh-high boots." Duca later said she received extensive online bullying and from men online as a result of the interview. 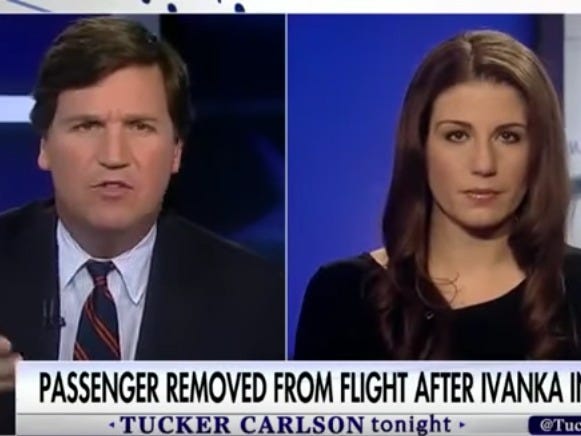 Most recently, Carlson found himself in more controversy after a CNN investigation found that his top writer, Blake Neff, was posting racist and sexist comments online under a pseudonym. 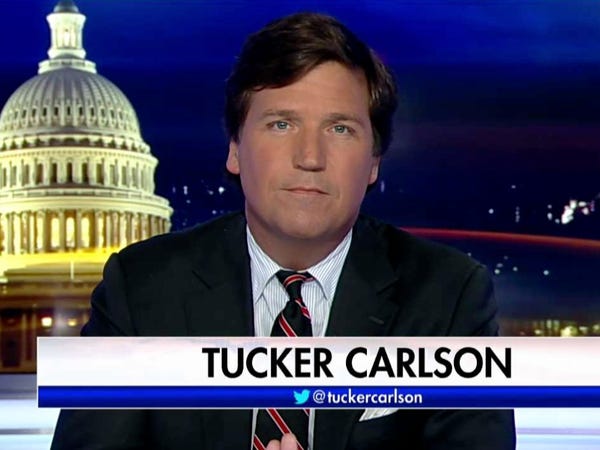 The Fox News hosts contentious comments have prompted several companies to pull their advertisements from his show on numerous occasions. 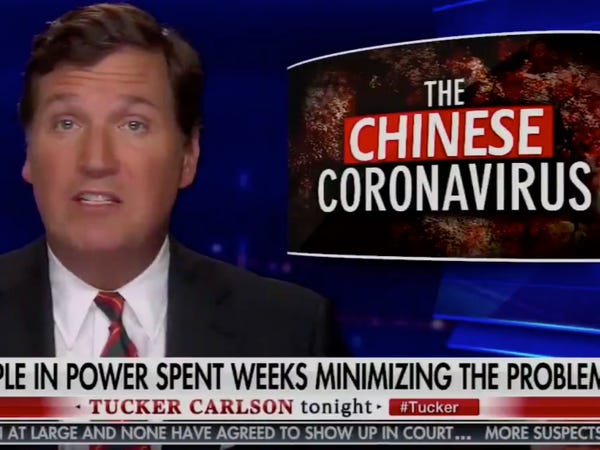 Most recently, Carlson's comments about the Black Lives Matter movement lost him high-profile advertisers including Disney and Papa John's, according to Politico.

In a 25-minute monologue in June that has drawn more than 5.4 million views on YouTube, Carlson said: "This may be a lot of things, this moment we are living through. But it is definitely not about black lives, and remember that when they come for you."

But over the years, Carlson's viewing numbers have shot up. "Tucker Carlson Tonight" is currently the most-watch cable news program in history and also attracts well over 60 million views on YouTube. 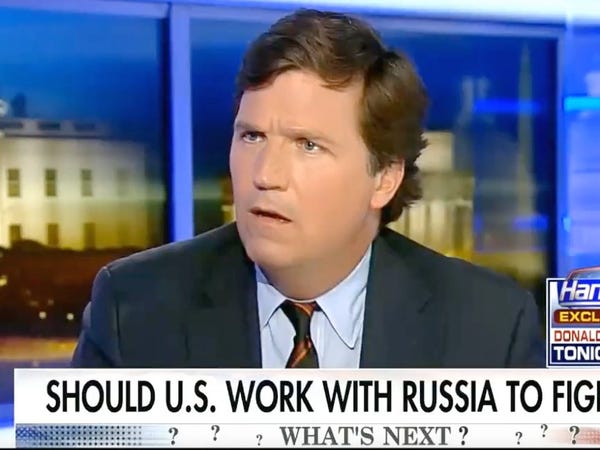 As Carlson sees growing success on his TV show, there are rumors that the could become a favored predecessor to President Trump. According to Politico, more than a dozen prominent Republicans said there's an "emerging consensus" in the GOP that the Fox News host would have a strong chance if he were to run for president in 2024. 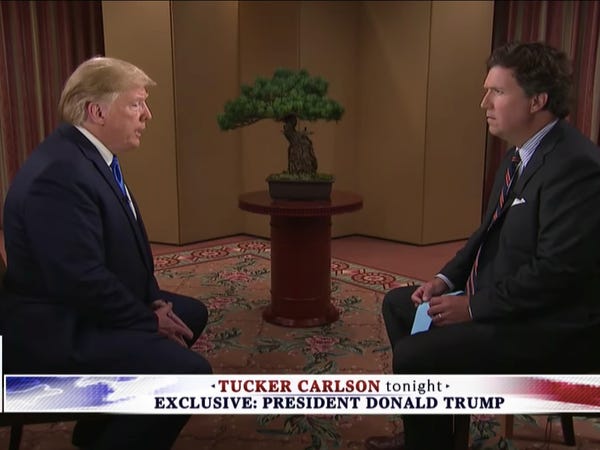 In the past, Carlson has denied ever having an interest in running for president. He also declined to comment on the Politico article.