It’s the multibillion-pound industry that kept on growing, based on a bean that Britons couldn’t seem to get enough of: coffee.

Until, that is, the pandemic struck. As is the case with many businesses hit hard by coronavirus, the ubiquitous coffee chains that have powered city centres and high streets across the UK are in deep trouble.

This week, Costa announced it is cutting more than 1,500 jobs. Pret a Manger is losing almost 3,000 staff and closing 30 outlets – while independents from The Exploding Bakery in Exeter to Kaffeine in central London have reported a slump in customer numbers.

The problems are laid bare in figures that would undermine any business model: spending on takeaway hot drinks in the UK slumped nearly 90% in April, the peak of the high street lockdown, according to the market research firm Kantar.

And while shops are gradually reopening and some workers have returned to the office, people are buying fewer hot drinks. In the three months to 12 July, £411m of takeaway coffees were sold – wiping £1bn off the market. And in the month to 9 August, Britons sipped less than half the value of the hot drinks sold in the same period last year.

That has put huge pressure on businesses already suffering from heavy competition and rising costs, and has raised a question that would have been unthinkable six months ago

: can coffee survive the coronavirus?

The demise of the barista undoubtedly goes hand in hand with the struggles of city centres caused by the emptying of office blocks and a massive slowdown in travel and tourism.

London has been hardest hit by the shift to working from home and a slump in tourism, with the number of shoppers out and about still nearly half that of a year ago, according to the latest figures from the British Retail Consortium.

Leeds, Glasgow and Birmingham all continue to have more than a third fewer visitors while numbers are down more than 40% in Manchester and Portsmouth.

With commuter numbers down, travel hubs such as bus, underground and train stations and tram stops, where coffee shops had sprung up like mushrooms to cater to bustling passing traffic, are now quieter.

Just over a third of coffee shops across the country have not reopened since the end of lockdown, with independents faring about equally with chains, according to the Local Data Company (LDC). While some may yet spring back to life, many will not survive as analysts estimate that the market is likely to shrink by a fifth.

“Is this a long-term shift? I’m not sure anybody really knows,” says Lucy Stainton, the head of retail at LDC.

“But if we think about coffee habits, a lot of it is driven by convenience. If you are running around town and in the ‘worker zone’ you might buy a coffee. We might go back to the office three or four days a week but that’s still pulling 20% of spend out of that market in a best case scenario.”

She adds that a £2.50 coffee might also be an easy treat to give up if the economic downturn, which has already led to a rise in unemployment, gets worse.

Peter Dore-Smith, the founder and director of Kaffeine reopened the second of his two central London stores this week but conceded it was “very quiet”. 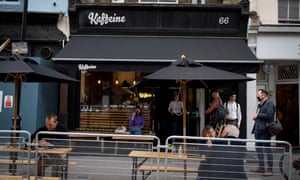 When he reopened the first in late June, sales were only 30% of normal levels and now they are at about 60%.

“We would like to think things will go back to normal one day in the near future, but we need tourists back and office workers back,” he says.

Britons have clearly not lost the taste for coffee – and it’s not all bad news. There are signs of a recovery, just not in the places that might be expected.

City centre locations may not be the same again, but commuter towns and suburbs are faring better as people working from home switch spending to their local neighbourhood.

For Pret for instance, sales in places such as Tunbridge Wells are down by about 12% on pre-Covid levels – compared with a 50% fall for its chain as a whole. So it is thinking of opening more shops in other regional towns.

Lizzie Gurr, the chief operating officer at Ozone, which wholesales coffee as well as running its coffee shops and an online store, says its independent coffee shop clients outside London have fared better than those outside the capital.

Regulars who previously visited only at the weekend are popping in more often as part of a trend towards supporting local businesses in difficult times.

“It’s been a really challenging time for independent operators but they are probably in the best position to be agile and adapt and in locations with more people around,” Gurr says.

Small businesses have switched to selling takeaways from the door, setting up tables outside. Some have expanded their menu to give a more leisurely meal to those willing to venture out for a treat.

Ciara O’Shea, the co-owner of F Mondays in Brixton, south London, which has switched to selling groceries alongside coffees from the door, says their businesses success has been the “silver lining of this time”.

“Being a community coffee shop you always think of the razzle-dazzle of town and how busy and bustling it always is. But this was the one time where the little guys kind of won,” she said.

In Exeter, The Exploding Bakery has halved staff costs and improved its food offering. “We are learning day by day. It is a different business to what we had pre-lockdown,” the owner, Oliver Coysh, said.

“We’re operating at about 70% turnover compared with last year. But our business is slightly more profitable due to half our staff being on furlough,” he said, adding that he is unsure what will happen when that scheme ends.

It is also one of hundreds of coffee shops to benefit from selling bags of coffee online for those wanting to stay at home. “We do have loyal local customers that support us – even putting our prices up slightly to compensate, no one has questioned it – and without that we would not have reopened and stayed open.”

And people are finding other ways of getting their caffeine fix; sales of coffee machines are up by a fifth at John Lewis and coffee frothers by nearly a third.

And sales of beans and filter coffee in supermarkets have also soared – increasing by 17% in the three months to 12 July to £345.4m, according to Kantar. .

Ozone and Grind, another small roaster that also runs its own shops, both said they had seen a huge surge in online sales as Britons become home baristas.

Grind, which sells compostable Nespresso pods of its organic coffee, says online sales are more than 30 times the level they were pre-lockdown, helping recover more than half the sales lost through the closure of its 10 high street cafes.

He admits that trading in its shops has been “a disaster” and the company will switch more investment to building an online business rather than opening dozens more cafes. But he says Grind will not be shutting up shop

“I think working from home has been overplayed. People were already doing it but I’m not convinced everyone wants to do it that much,” he says.

Jeffrey Young, the chief executive of coffee market analysts Allegra, agrees. He says coffee shops are not just about buying a drink but giving ourselves a treat we can’t get at home.

“It’s about a sense of belonging and being around people and being served and smiled at”.